People often wonder “What is a NoSQL Database?” and certainly land on inaccurate conclusions. Thus, our team of experts have written this article to solve all your queries related to NoSQL databases.

NoSQL databases are a type of database that can be used to store data in a flexible way. They are different from the traditional SQL database, which is more rigid and structured.

The below table will help you understand how NoSQL databases haven taken off in comparison to the SQL terms. 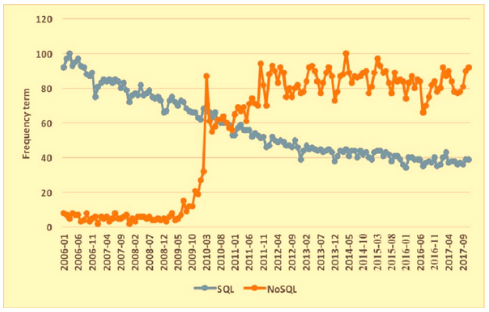 (Google trends explaining the rise of NoSQL versus SQL terms)

The Demand for NoSQL Databases?

NoSQL databases are a class of database management systems that do not use the relational model for storage and retrieval of data. NoSQL databases are designed to handle large amounts of data, and are often used in big data applications.

This is because they have a simpler structure and can be queried with different types of queries. NoSQL databases also have lower hardware requirements because they don’t require as much processing power, which makes them cheaper to maintain.

When To Use NoSQL Databases?

NoSQL databases are not a replacement for SQL databases. They are an alternative and have their own set of benefits.

NoSQL databases also have a wider range of storage types than SQL database does. This means that you can store your data in a variety of formats, which can be more useful in some cases than others.

The benefits of NoSQL databases over relational databases include:

NoSQL databases are not restricted by the rigid structure that is imposed on them by their respective schema. This allows for more flexibility and better scalability.

NoSQL databases are designed to scale better than traditional relational databases because they can handle large amounts of data without sacrificing performance.

What Are The Best NoSQL Databases in 2023?

Let’s dive into the best NoSQL databases to use in the year 2023 for your next big project.

RavenDB is one of the most popular NoSQL databases that has offers some features of a relational database and it is open source. It is easy to use and can be used for both small and large projects.

It allows users to have fine grained control over data storage, which makes it easier to scale the system. This database also offers high availability and replication, which means data will not be lost in case of hardware failure or natural disasters.

RavenDB is one of the best NoSQL databases to use. It is designed as a scalable, multi-model database that provides rich support for complex queries and schema evolution.

Couchbase database is a distributed NoSQL document database that can run on-premises or in the cloud. It is designed to work with applications that need fast access to both structured and unstructured data.

OrientDB is one of the first multi-model open-source NoSQL database programs that let you make the best use of graphs. OrientDB lets you store, manage and query data in a fast and efficient way.

The OrientDB open source project was created by Alessandro Franceschi in 2009. The project was founded by Franceschi, Federico Ceratto and Luca Garulli with the desire to create a new kind of database that would be optimized for storing graphs and other complex data types.

ArangoDB is a document-oriented database that has the ability to store data for graphs, documents, and search. It provides powerful graph traversal capabilities and is designed to scale with high performance.

ArangoDB is a distributed multi-model database that is designed to store and query both large and small data sets. It provides the same familiar SQL interface regardless of the size of data set and allows you to build high performance applications using a variety of programming languages.

Neo4j is a NoSQL database focused on storing graph data. It could prove to be a viable solution for analytics as it can store and process large data sets in a fast manner.

It is also important to note that Neo4j is not just limited to being used as an analytical tool, but it can also be used for other purposes such as web application development, enterprise data management or even mobile app development.

The Cassandra database was originally designed to organize data over multiple nodes in a cluster, so it’s more efficient than other databases that have to move data over the network to find the node where the data needs to be stored.

MongoDB is a popular NoSQL database platform that is gaining more and more traction in the market. The database has been around for a while now and it has been used by many companies to store their data.

MongoDB is an open-source NoSQL database platform for storing complex, semi-structured data. It has many features that make it stand out from the other databases in the market, such as its ability to scale on demand.

The most important feature of MongoDB is its scalability, which allows it to grow with your business without any downtime or interference with your applications.

MongoDB can be scaled on demand without any downtime or interference with your application, making it a perfect fit for organizations that are looking to expand their operations.

Amazon DynamoDB is a NoSQL database platform that provides fast and predictable performance with seamless scalability. It is a fully managed, highly available, scalable database service for applications that need consistent, single-digit millisecond latency. Amazon DynamoDB lets you offload the administrative burdens of operating and scaling a distributed relational database so you can focus on your applications and business.

Azure Cosmos DB is a NoSQL database platform that provides a globally distributed database to store and query data at any scale. It has SQL-like query language, which makes it possible for developers to use familiar tools and techniques to access their data in CosmosDB.

Nosql databases are also useful if you need to store a large amount of data that is constantly changing and does not have a specific structure. We hope this article helped you better understand NoSQL databases. If you have any query related to web development or if you are on a hunt to look for web development services, contact Accrete Infosolution Technologies today!